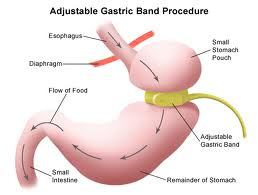 The virtual gastric band, sometimes know as Gastric Band Hypnotherapy, is based on the idea of the surgical gastric band. There is no certainty of its origins as the concept has been constructed in a number of ways by various hypnotherapists the first of which were Martin & Marion Shirran at the Elite Clinic in Spain, after world wide media attention they registered the trade mark for the Gastric Mind Band in

North America and Europe. The Shirran’s were invited to the USA to appear on various TV networks at the time of the publishing of the book, Shirran’s Solution – The Gastric Mind Band from Argentina and Sheila Granger from the UK also claim to be the first to use the process. Granger’s interpretation of the Virtual Gastric Band garnered interest from the media and the BBC when she began working alongside a National Health Service (NHS) general practitioner (GP) and ran a trial that proved 95% successful. Sheila claims to have trained hypnotherapists in USA, Canada, Europe and Australia. Scharovsky claims the same for several countries in Latin America.The virtual gastric band is a concept used by many companies under a range of alternate guises including Slim-Think, Hypno-Band and Gastric Mind Band. No individual can claim ownership over the name “virtual gastric band” as it is a concept open to interpretation by any hypnotherapist. However, some interpretations are more successful than others.

Am I suitable for the Gastric Hypnotic Band?

Will the Hypno-Band work for me?

No! The Hypno-band system is a non-invasive behaviour changing method using the techniques of Hypnotherapy and Cognitive Behavioural Therapy.

One of the most common areas of controversy of is the use of hypnosis as a tool for an effective therapy.In a study made in 1996 in which hypnosis was combined with a cognitive-behavioural therapy (CBT) it was found that people who used both treatments lost more weight than people that only used CBT or Hypnosis as stand alone therapies.

The gastric virtual band procedure does not require surgery, and hence, there is no physical trauma or need for hospitalization  It is also our experience that loss of weight can be experienced from the beginning of treatment.Hypnosis also has the added benefit reduced costs compared with surgery, No recovery time required leaving you free to carry on with your normal routine.

At The Watford & District Hypnotherapy Centre we offer private therapy sessions Monday to Friday between 10:00 and 20:00 and Saturday mornings between 10:00 and 16:00 at which we can discuss and develop a bespoke program to help identify and work towards a resolution for your smoking cessation challenges.

Sessions are on average 60 minutes in length and cost is £65.00.Specific number of sessions required is hard if not impossible to state as it is a very individual set of circumstances and responses that bring about the various challenges, we offer a free of charge no obligation initial assessment at which we should be able to assess likely number of sessions required.

Book your appointment with us today !